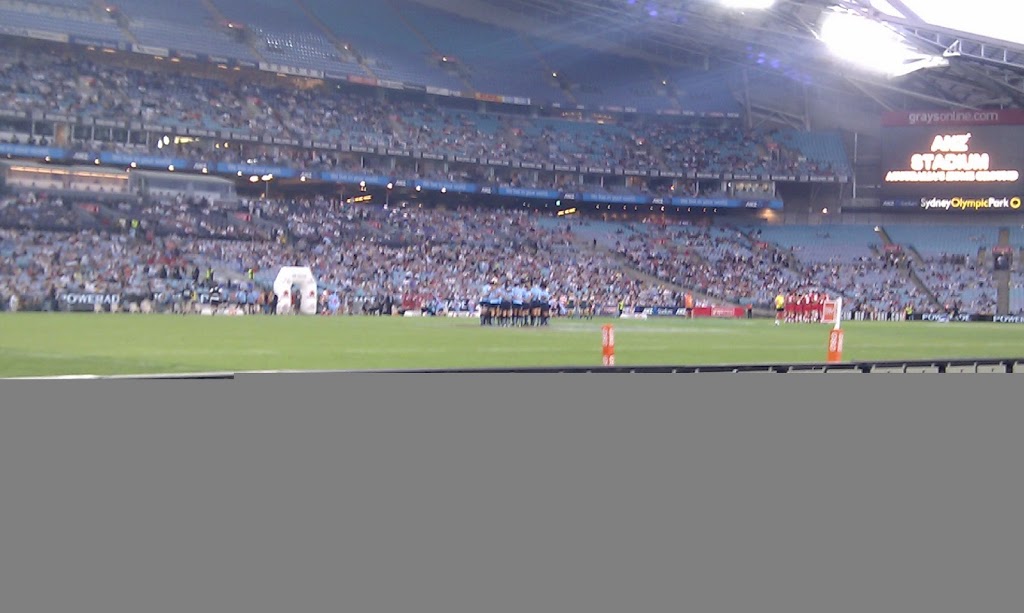 Lisa and I tagged along with a group of about 15 dudes (which is semi-gender neutral here), most of whom went to high school in Queensland together, to watch the New South Wales (the state we live in) Waratahs vs. the Queensland Red in a Rugby Union match.  From a mascot perspective, it pit a red flower / shrub (the Waratah) against a Koala with “Red” for a nickname.  Quite a struggle for outback supremacy.  While watching AFL (Australian Football League) and cricket on television have instantly made me a fan of the sports, I have a much, much harder time with rugby.  I’m sure the same applies to anyone watching a baseball game for the first time as well, and it’s possibly quite worse.

As always, the Ozzie’s want to know what us Yanks think of these sports:  The game of Rugby is over very quickly – two 40 minute halves with no interruptions, and yet they still serve four beers per person at a time.  When the ball is thrown in, the teams form small pyramids, like miniature cheerleading contests, to lift the tallest team members up in the air to catch the thrown-in.  All penalties seem to have four word names (“Not Rolling Off Ball”, “Feet Not on Ground”, “Tackling from the side”, “Buskering against the Brekkie” and so on). Most of the scoring occurs due to kicking the ball from penalties and not making it into the goal line.  Overall I doubt we’re going to become rugby fans, not because it’s a horrible game, but just that it’s farthest away from what I get excited about as a sports fan.  The vast numbers of terms in cricket and the complexity of the game are a big part of what I like.  AFL is simply what football should be as a kid – free, violent, and fun.

Oh, and Waritah’s win 30-6.  One thing I am excited about in Sydney is cheering (not rooting) for the home teams.  When I moved to the Bay Area for uni, I already disliked the 49ers and Giants and could not become a fan.   I did dabble as a San Jose Sharks fan for a while but couldn’t quite be converted.  When I moved to Austin, the home of the Texas Longhorns, it could not have been worse.  My favorite sports team in the world is the Stanford Cardinal baseball team, and in a ten year stretch, Stanford and Texas were responsible for knocking the other one out of the College World Series at least half of those years.  So again, I could never cheer for the home team.  Here in Sydney, I’m a little disappointed that our AFL team is the Swans (come on, a swan?), but at least the New South Wales cricket team is “the Blues.”

Maybe it’s because my cerebral fluid is spinning counter-clockwise now that we’re in Australia, but I think I’ve been moodier than any other time since 2001 (the year of the personal tri-fecta disaster) and the first half of 2004 (chemo, steroids, dialysis).  Apparently that tainted the impact of my last blog post, which I didn’t think was negative at all, just openly honest about how difficult a lot of change can be all at once.  However, the overwhelming comments on the post and emails and phone calls, as well as the 8 shock-therapist-a-grams that were sent my way indicate I missed my mark as an author, and I came off as bent out of shape and a tad unhappy.  Quite the contrary – we’re excited to be in Sydney and just working through everything new.

Our new address on Monday is in Paddington, a small neighborhood that centers around Oxford street, and right next to Surry Hills, my favorite place for spots to eat in Sydney.   Yesterday, we scored five pieces of furniture for $400 Australian (now pretty much 1:1 with the U.S. dollar), at a used furniture store which I think is called Pete Foley’s Furniture, where the Ozzie who helped us was a former swimmer for the University of Hawaii, and swam at national championships at UT in Austin in the late seventies.  Fantastic guy.  We were on a cheap furniture high for the next hour.

I signed up for my first triathlon in Australia yesterday, a sprint distance event in Penrith, about 60 km West of Sydney, for the first week of May.  The wildest thing to me about the race is that it will start at 4 PM.  It’s pretty cool to not have to get up at 3 AM to make it to a race, though I am a lot faster and stronger in the morning than I am in the afternoon.  One of my co-workers is doing the triathlon, and he talked me into signing up, and I’m excited.  This means training begins this week!  My tri-bike doesn’t arrive until April 1st, so I will be focused on running and finding a place to swim near our place in Paddington.

Just in case anyone is eating while they read my blog, I will spare the details of the ingredients and manufacture of a pork pie, a traditional English snack served cold.  It is not even a distance relative of the meat pies you can get around Sydney, but I have had my last.  My friend Neil from Melbourne came and led us through the narrow pathways of the Rocks (the first Sydney settlement) on a late night, which included a stop at Lord Nelson’s pub (one of the two oldest in Sydney – a rivalry of who is actually the elder continues today), and that was the tragic scene where the pork pie was unleashed on two unknowing Yanks.  Had the Brits fired pork pies from their cannons in the Revolutionary War, we’d still be the colonies.