Friday morning, Lisa and I waited outside of the nearest Post (post office) – when it opened promptly at 9 AM, a bright and cheery face looked out the door at us and asked “Is it just you two?  Normally we have a queue all the way down the ramp!”  The next ten minutes would redefine what I thought was a worldwide human genetic characteristic – that postal workers are disgruntled powder kegs waiting for someone to argue the price of book rate, so they can finally use the mail order AK-47 they’ve patiently kept under the counter for so long.

I had imagined that Osama Bin Laden was actually hiding in an Afghani Post Office Cave, since that’s where the most insane, jihad-riddle maniacs lived, trying desperately to determine where on the goat the stamps should go.

But perhaps the friendliest people in all of Australia work in post offices, and even when we were done sending our certified letter, I wanted to hang out a little longer.  To make things even more upside down, they sell toys and electronics in the post office.  What could possibly be better?  I have been looking for a place in our neighborhood that could be my hangout away from home.  If only the post office were open late…

Katoomba and the Blue Mountains 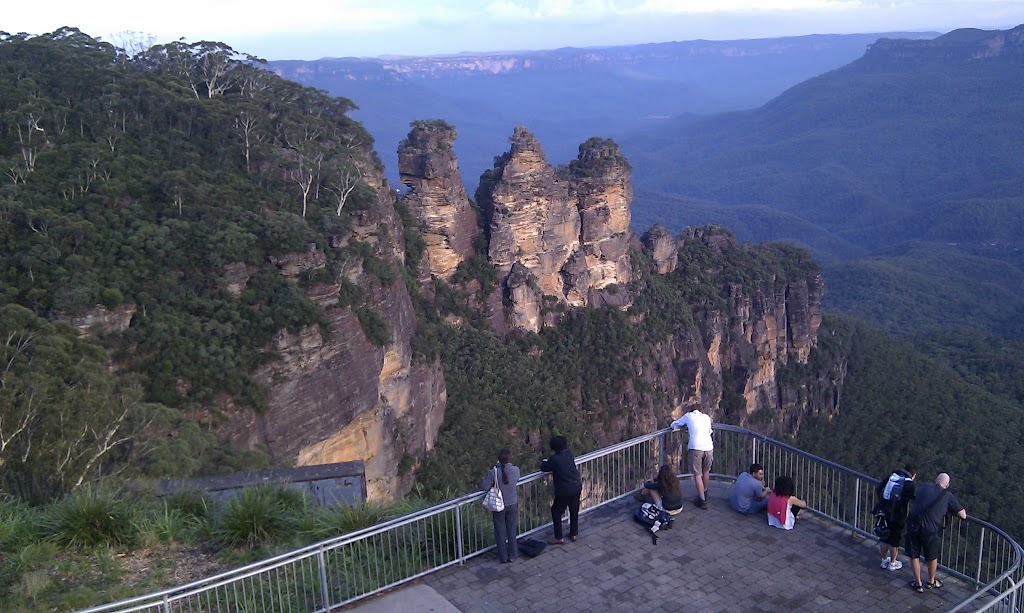 Lisa and I escaped Sydney to the Blue Mountains on Friday, part of a celebration that shall remain unnamed.   We hiked from the Three Sisters (a tourist lookout over three rock formations that are underwhelming considering the incredibly valley that they overlook) down the Furber steps and then back along the Federal pass.

The photo here is not my favorite of the trip but the picasa client on my android seems to choke on upload quite often and declare success despite partial uploads and complete failure on uploading videos.

Saturday we trained to Blackheath, hiking (or trekking, no one seems to use the word hiking here) the Pope Glen trail, which a website had recommended.  It might be one of the most boring trails I’ve ever traveled.  Eventually we could see Pulpit Rock, and the situation changed drastically – majestic cliffs that jutted out from a valley again and again.

As we started back, an American med student named Meg joined us, and the three of us climbed our way out of the steps, the combination of rain and water coming off the rocks soaking us completely. The climb was fantastic, and we flew up the wet stairs, shivering and smiling with the experience of scaling higher and higher along the cliff side.

A little closer to life

We now have appliances, which opens our lives to luxuries like washing clothes and not having to eat everything we cook.  One meal this week became a hysterical eating death march because we cooked too much, and had to force feed the rest to ourselves to not waste food.

This week, TV and internet will be ours, and we will enter the world of the 1990s.  Our “stuff” sails closer every day – like a second Christmas where we get to open things we already own.