The Easter Holiday in Oz

It’s more than ironic that Australians enjoy a four-day weekend for Easter despite the majority of the population being atheist or agnostic, and most who are Catholic or protestant are only keeping their allegiance so their kids have access to the private schools bearing the denomination of their parents or grandparents.  And yet Sydney-siders by the 10s of thousands pack up on good Friday and scatter around New South Wales and father, North to the beaches, South to the beaches, really anywhere to the beaches.  The weather this weekend was excellent, and Sydney-siders, having been robbed of a decent summer, have taken these four days as their last chance for some reciprocation from the weather-controlling powers that be.

The Rollins were in desperate need of an escape from the city.  Long work hours for both of us had led to a state almost fully absent of excitement in my day-to-day life.  I was living just to take another step in the same tracks we had made in the weeks before.  So we followed our neighbors and headed South, farther than Kiama (where we had spent last Easter), on just past Jervis Bay to Milton.

Our choice of Milton was largely because we booked our holiday much later than we should, and we found the Meadowlake Lodge available – lucky us, because it was exceptional.  From Expedia it looked nicer than what the frugal Rollins would usually pick, but we realized that we needed a break from Sydney and it was worth whatever we needed to pay to get away and relax.

Friday: The Commute to the Holiday 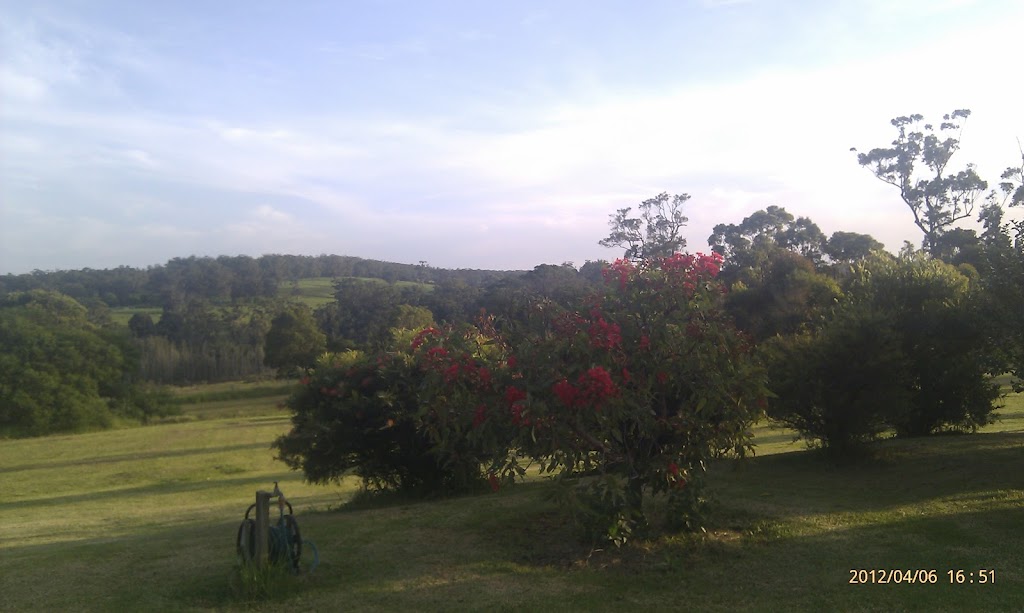 Our drive South hit what everyone tells us the typical Easter weekend traffic patten – when the road near Berry goes from two lanes to one, traffic comes to a crawl or a halt, and we lost 45 minutes to that end.  After a takeaway chook lunch in Nowra, we made it to the Meadowlake lodge in the afternoon, time enough for me to get a quick bike ride in.  The road to Meadowlake is all vertical – either straight up or straight down.  I haven’t been on my bike in forever, and my lungs kept reminding me of my poor training over the last year.  A shower and a rare nap left me ready for action.

At half past six we met our hosts, Peter and DI, who built the Meadowlake lodge 11 years ago on 100 acres of property. The property is incredible.  You see two different lakes from the hilltop of the lodge, half of which is Peter and Di’s home, and the other half are three separate suites which are incredibly comfortable and a great escape.

We met Dom and Emily from Newton, who were also staying there, and had stayed there before, which seems to be a common theme with the other guests we met – they get a lot of repeat business, and I can understand why.  The breakfast in the morning is fantastic, and you cant help but relax looking out at the lakes and the green, rolling hills that surround the place.

That night we ate at the Wood fired pizza cafe in Milton, which was the perfect fit for our mood – we wanted something casual, where we could relax and stuff our faces with some fantastic pizza.  Once we arrived home I managed to stay awake for 10 minutes before falling fast asleep.

Saturday morning, after an amazing breakfast, we drove back North to enter Jervis Bay to check out Booderee Nattional Park.  We hiked the circuit trail, starting off hiking down to Steamers beach, which I’d rank above Wine Glass Bay and other beaches in Australia because of the small cove, huge breaking waves, and the seclusion.   Initially we ran into several other hikers, but quickly we found ourselves alone for the remainder of the day.  Lisa and I set a quick pace for the day and cruised through somewhere near 15K in under 4 hours, with a lot of vertical up and downs.

We returned to Meadlowlake to clean up and get ready for dinner.  We ate that night in Milton at Bacchus, where everything was great – including Lost Stocks Perdu, a Heathcote Shiraz.  (We’re always picking anything from Heathcote since our friends Neil and Margie have a place there that we visited last

(Note: picture at left is not of us; borrowed from Jervis’ Bay Stand Up Paddling Facebook account) We left early Sunday so we could make it to Huskisson Beach our time for Stand Up Paddling – essentially where you stand on a surfboard and paddle forward.  I really enjoyed the feeling, despite having jelly legs at the beginning, before I adjusted to the balance of the board.   In playing around trying to quickly spin the board in a back and forth 180 with the paddle, I managed to dump myself in the water, which was warm and made we wish I had jumped in earlier.  I can easily see buying a stand up paddle board when we’re back in Austin – much easier to load onto any car, and cruising down Town Lake would be a great way to start a morning or end the day on a summer evening.   Our instructor, Mel, let us try her board which much like better surfboards, is more narrow and agile (and trying the same 180 as before I dumped myself again).   After our lessons we took a quick swim and packed ourselves back to Meadlowlake.

We ate a mediocre lunch at the Breakers Cafe in Mollymook before driving out to the Pidgeon House Mountain trail entrance.  Half of the drive is unpaved and I expected to see a tire rolling off the rental car at any moment, especially when I hit the one lane bridge entirely too fast.

The hike to the top was steep but not that long – the signs advertised a four-hour return trip, our host Di said she had done it in 2 hours and thirty minutes. We reached the top in about 55 minutes, only taking about 5 minutes of rest on the way up.  Despite a long hike the day before, and shaky legs from the paddle boarding, we had made great time to the top.  The way down was actually more worse, and harder on knees, ankles, shins, though much faster or course than the ascent.

Dinner at St. Isadore made Milton three-for-three in great meals without too much pomp.

Monday: Back to Sydney

Traffic returning to Sydney was bad, though some people have said it took six hours in the last, it took us closer to four hours.  The drive back to the city felt like the end of a prison furlough rather than returning to home.

Over the past months my personal happiness has been a mixed bag, mostly because of poor health, lack of sleep, and too much self-analysis.  Work has luckily allowed me to ignore a lot of it:  the one-dimensional nature of my existence prevents me from noticing the lack of the other dimensions.

After a year of living in Sydney, I think I’ve realized I just need to give up on recreating my life here.  Until we leave Sydney, I won’t be doing triathlons, I won’t have the number or type of friends I have in Austin, I won’t be involved in the other areas that have made my life as rich as it once was, and I should just concentrate on the things that I can do here, make the most of however long we’re here, and take advantage of what’s unique about Australia, 99% of which exists outside of Sydney.  So here’s to escaping whenever I can, even if means I start “commuting” on weekends!

One thought on “Easter Weekend in Oz”