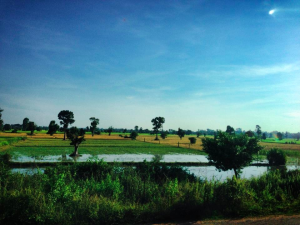 Rarely do I struggle to find the beginning of the story – possibly because in most cases I know the ending, and then it’s simply all in the setup.

Last week I witnessed incredible poverty – but I have seen that before in Jamaica, in India, in other countries.

The challenges of Cambodia have more layers than I possibly imagined, and I’m sure anyone who has spent more than a week here would smile because I’m just scratching the surface.   But first, our story starts with a few days getting adjusted to Cambodia.

Welcome to the developing world

I’ve always wondered what the second world is, because there’s such a massive gap between the first and third (turns out that “Second World” actually refers to former socialist industrial states like the U.S.S.R.).  Within minutes of landing in Siem Reap, there was no question about how this was the developing world and not the first world.  Dirt roads were still common, sidewalks didn’t exist, and traffic was a maelstrom of motos (scooters), buses, bicycles, and the occasional ox cart.   Our hotel picked us up, we checked in, and then went to dinner that night with the other people from Atlassian.  Given that on this trip I promised myself I would be adventurous, I ordered and enjoyed the stuffed frog. 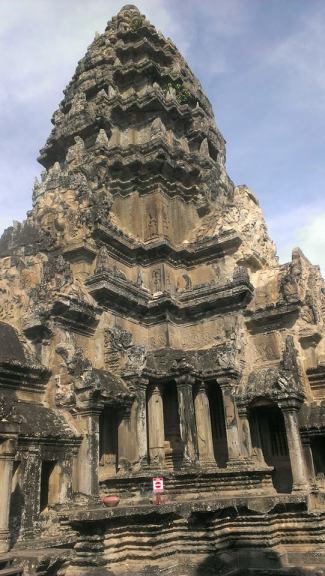 While the Taj Mahal is a beautiful palace, Angkor Wat renders it pale in comparison.   Angkor Wat is 500 years older, much more interesting (in general given that Islamic Art can only use geometric patterns and similar non-human representative art, the Taj Mahal can’t tell as much of a story) and represents a civilization long gone.

The temples in Siem Reap are straight out of Indiana Jones and Tomb Raider (both film series have filmed on location here), with bas-relief of Hindu myths, reclining Buddhas, guardian lions, and beautiful Asparas, in varying states of decay.  Tragically, in Cambodia’s poverty, they have sold the temples to foreign owners who now collect the $20 in fees from the 3 million people who visit every year.

Andrew, Caroline and I went the full distance, including seeing Ankhor Tom and Ta Prohm and returning to Angkor Wat to scale to the top.

Our guide for the day recommended we check out one more stop: The Siem Reap War Museum.  My tourist-getting-ripped-off spider senses were tingling, and as we arrived, I was convinced that I was right.  $5.00 to enter basically a giant grass field with a bunch of rusty tanks, Howitzers, and armored vehicles.  I was tired and not happy we had been dragged there.

But first, before I make a complete ass of myself, some history:

Cambodia used to be the dominant civilization in Southeast Asia – strong Khmer kings ruled much of the surrounding countries as well. After the decline of hundreds of years of dominance, and after French colonization, the most well known Cambodian history is the reign of terror of the Khmer Rouge in the late seventies. The Khmer Rouge genocide wiped out families, most of the educated class, and created a culture that lived in fear of speaking the truth, and favored silence over expression.

Most people over 40 in Cambodia were either involved in the fighting, or drastically affected by it.  The war crimes trials are still in process, as the remnants of the civil war were still going on in the 90s.

While our normal tour guide played on rusted tanks with our van driver, our War Museum tour guide walked us over to a set of guns laid on some boards in a shack.  He asked if I knew the name of the rifle he was holding.  I was a military nut as a kid, and I told him it was an M-16.   He said this was the gun he used when he was a part of the Khmer Rouge.  At that point, the needle went flying off the record.   The next 10 minutes, with a smile on his face, he told us the story of his parents being shot in front of him, being forced to join the Khmer Rouge, being indoctrinated and being told his parents had to die because they were working with the CIA, of losing his leg to a land mine (he pulled up a pant leg to reveal a prosthetic), how he switched sides once he had a chance, and how another tour guide (who had been in the Khmer Rouge) had shot him three times when he was on the opposite side.

The War Museum is a junk yard full of old rusted military hardware, but the tour guide was worth 10x more than the price of admission.

Cycling in the Countryside

On Wednesday morning, I spent a whopping $7.00 to have a mountain bike for the day, and I expected a piece of junk.  Surprisingly, I got a great bike.  I headed out West on the crowded, dusty National Highway 6, mingling with the buses, motos, tuck-tucks (rickshaws pulled by motorcycles), and slow city bicycles.  I surprised quite a few people by passing motorcycles on my bike – or maybe the surprise was that a pale white guy in a bike helmet and skin tight bike shorts and bright green jersey was weaving in and out of traffic…

I found a turn to the South down a beautiful red dirt road, and passed people working in green rice paddies.  I rode by bungalow homes set on stilts to avoid being flooded during rainy season.  Kids played together in the street and in yards, laughing, and yelling ‘Hallo!’ when they noticed me coming, often waving and running towards the street.  I don’t know if there’s a country where people have more beautiful smiles.   It felt like a neighborhood.  There were no cars, no paved driveways, no curbs.  But families were outside, talking with each other. Kids from different families played together.   There were no fences except to keep ducks or animals in.

At a T-junction in the road, there was a school – but it looked like a temple (probably was one at some point, and in fact probably still is used as one).  Set in the rural backdrop of the families and their lives, it blended perfectly as a centerpiece to everything. 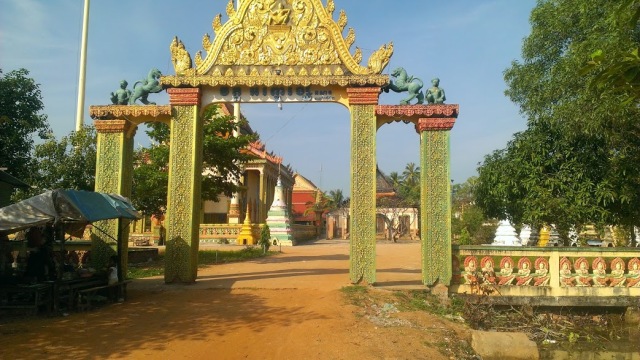 Three hours later, I returned to our hotel, beaming with a huge smile on my face.  A long shower washed away the caked layers of red dirt and gnats that covered me.   With some lunch in me, I felt ready to take on the world.  How wrong I was.

That afternoon, our real adventure would begin, as we met with Room to Read, the reason why I was in Cambodia to begin with.   But, that’s a different blog post that I need to write…

3 thoughts on “Cambodia: The first 48 hours”