Yesterday I had the stitches removed from my transplant scar, more than nine years after the operation.

To be honest, it was a fiasco and in hindsight a bad decision on my part. I’m fine, it didn’t affect my health, but I really regret not pulling the plug on the entire operation.

A Scar with Painful Bumps

A year or so after my transplant I complained to my nephrologist about the three hard bumps along my scar. I think he said it was likely scar tissue.

A year ago when I started seeing my new nephrologist in Sydney, I told her about how these “bumps” were often digging into my stomach when I was riding or exercising. She said, “That’s likely left over stitching from your surgery. You could get those removed.” And she referred me to a transplant surgeon.

I met the surgeon a couple of months ago. I explained that this was a nice to have – not affecting my health, just painful at times, but not worth spending a lot of money or effort.  The surgeon explained that the transplant surgeon in Houston had used nylon thread which doesn’t dissolve. I asked him if he used nylon thread 10 years ago, and he said no. Apparently my surgeon preferred that I have knots of nylon in my stomach for the rest of my life, even though they are only useful in the first few months. What could be done is a small incision, cut the nylon thread, pull out the knots and the thread. The surgeon said it would be easy, take 30 minutes, and could be done “here.” I interpreted that to mean his office, as an outpatient, and not requiring going to the hospital.

The Build Up (or the bait and switch?)

When I called up the next week, his assistant tried to schedule me into the hospital for surgery and I had her schedule it for his office instead.  A day later his assistant called me back and explained that it only happened “in Theater,” which sounds fun but really means in the hospital, but still as an outpatient.

A month or so later I received a letter about admission to North Shore Private Hospital (which is a great hospital in Sydney). It seemed really formal for something so quick and easy. And it listed the anesthesiologist, which immediately put a frown on my face.  Then, I had to fill out an online registration form embedded in the worst “form builder” software imaginable. It took me 30 minutes to register for admission, mostly because this web app was so painful.

Our prices can’t be beat because no one knows them

By now my seventh sense (the one that detects the presence of the Medical-Industrial-Extraterrestrial conspiracy) was lighting up. Earlier his week, I called the Surgeon’s office and asked for cost. The answer: “Not much at all.” When I pressed for details, they said that my insurance would cover it. I explained that this was not what I was asking for. I was trying to understand the total cost. Everyone seemed confused as to why I would care since I didn’t have to pay anything.

There’s actually a big debate going on right now about health care costs in Australia, and whether a patient should have a co-pay (which they don’t under Aussie medicare today). Reading Friedman in junior high taught me one of the most valuable lessons in life: There is no such thing as a free lunch. I tried patiently to explain why I cared, but it confused the staff even more. I was transferred to two different people who could not grasp why I cared “when someone else was footing the bill.” Finally I was told that the hospital admissions team would call me back and give me a total cost. Everyone still seemed to be puzzled with me, wondering why I wasn’t eating this delicious free lunch.

Friday morning I was not supposed to eat after 8:30. What? For something this simple? Friday afternoon came, and after a quick low-blood-sugar-train ride to the hospital, I went to admissions, got my patient wristband, sat in the “Short Stay” section of surgery (outpatient). Eventually I was called, walked through the details of the operation by an Irish lass who was moving to Darwin the next day, and robed myself in the finest white gown available. (At first I picked up a gown that would barely cover me, with no arm holes or belt. I looked at the nurse and said “Come on!” and she laughed and explained that I had picked up a sheet). At this point I was in a good mood, but couldn’t form complete sentences – or more accurately, I could not finish one before I started the next one.

And of course, in my low blood sugar, what friends refer to as “hangry” (hungry + angry) state, I had a few things to discuss with the hospital staff.

By this point I had been touched by at least 10 people. For something “quick and simple”, I had been in the hospital for almost 2 hours, and wasn’t even “in theater” yet. 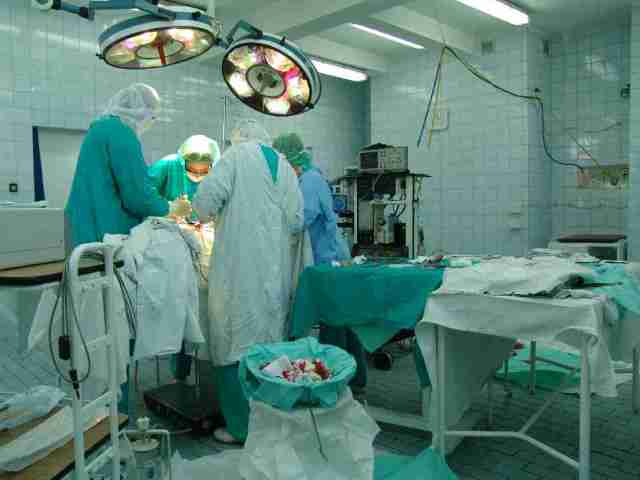 I am finally rolled into theater, where the cast and crew (at least six people and probably more like 10) all get a good look at the family jewels. The surgeon enters, I get a couple of painful shots in my abdomen of something-caine, and the cutting and smell of burnt stomach flesh enters my nostrils. There was very little pain and people were complimenting me on how I was doing this without sedation. The only real pain came when he was pulling the nylon thread through where it was sown into the abdominal muscles. That did not feel good. He had to cut deeper twice because the knots were farther down than expected. But he pulled each one out and showed it to me, along with little chunks of me attached to it. Kinda cool, I have to admit.

It’s over, I’m wheeled to recovery. I am ready to go home, I am not sedated, and the wound looks fine, is not seeping. But they have to make sure I can eat and pee. So, like a zoo chimp, I eat and pee (not in front of anyone, so I could have faked it) for the amusement of the staff.

I cannot wait to be discharged and neither can the staff.  After leaving work at 1:45, I arrived home at 7:30 PM. A six-hour ordeal for 15 minutes of cutting and stitching. And my reward? No showering today and 10 days without training.

Overall, it was huge waste of time and money. But, I should know better. Surgeons like to cut. Their solution to almost any problem has a sharp edge to it. When a surgeon says, “it will be easy,” they are only thinking about the surgery and their part in it, they are not thinking of the overhead, the cost, the recovery, or the actual impact on the patient. Of course I’m generalizing, but I’ve had enough surgery in my life that I think I get to make a couple of generalizations.

Now I’m waiting on word on whether or not I’m going to need surgery on the torn labrum in my hip. The latest MRI indicates that it’s very likely. I’m waiting to hear what the doctor says. Hopefully I can be better behaved at this one. But I’m still going to ask what it’s going to cost. And I’m going to take some small sadistic pleasure watching the confusion ensue.

3 thoughts on “Happiness is Surgery (well, actually not)”