We’ve let another yank in?

But, since no matter what I write, most of you aren’t functionally literate beyond 140 characters, so I will do this in FAQ style:

1. Do you have to give up your U.S. Citizenship?

2. Do you want to give up your U.S. Citizenship?

No, no I do not. It is painful either to keep your U.S. Citizenship or to renounce it.

3. Why is it painful to keep your U.S. Citizenship?

As a yank working overseas, you still have to file U.S. taxes, and if any U.S. tax rate is higher than your country of residence, you pay the U.S. the difference. In one case I’ve had to pay a combined 80% tax rate, though that should only happen if your tax advisors are caught off guard or you live in a country with no tax treaty with the U.S., like most of Africa, or if you are really bad at maths. The U.S. is unique is being an extra special pain here.

4. Why is it painful to renounce your U.S. Citizenship?

Start with a minimum $2,350, highest in the world. Thanks so much to the greed of the U.S. Treasury and the actions of a facebook co-founder employee, the U.S. introduced an exit tax – the most basic explanation is that as you hand in your citizenship, we’d like tax on the “net unrealized gain in the individual’s property”, i.e. any unvested stock, stock options, unsold property – the IRS will estimate the future value of it and ask for all the tax now. Leeches.

5. Are you doing this because of Voldemort?

I wrote a blog about Voldemort before the U.S. Election. I don’t want to use his name in writing in a blog celebrating a big event in my life.

But my decision to become a citizen of Australia has nothing to do with the occasional resident of 1600 Pennsylvania Avenue.

My quest for citizenship starting long before that no-talent ass-clown started winning Grammys.

6. Are you ever coming back to the states?

7. What made you decide to become a citizen?

Australia is my home. It’s where I want to spend the rest of my charmed life. It’s a strange thing because so many of the people who I care a ridiculous amount about: live in the states.

But, Australia is great for me. Even just two weeks in the states, and I’m itching to get off the spinning hamster wheel and get home. In Oz, there are many wonders: the pace of life, the land, and that nothing is a crisis. “She’ll be right, mate.” I’m lucky to get to live here. If I step back and think about the things that are the most important to me, outside of my friends and family, Australia has them all.

At a primal level, and potentially the most important, there is something about my connection with the ocean in Australia that I have never felt anywhere in the world. As well as the romantic relationships I have fostered with several wombats.

I announced my retirement a few years ago, and I knew Australia is where I wanted to retire. Eventually, somewhere North of Sydney, near the ocean, in a house with a garage full of bikes, I will start the next phase of my life.

Yes, and a proud one

There are a number of ex-pats I know who think of citizenship more like getting a local drivers license: just paperwork. To me, it was a conscious choice that this is my future home. That I am agreeing to the values of Australia. That I want to play my part in shaping the country through voting and action. That I will defend my country if we are invaded by Antarctica.

From this time forward
I pledge my loyalty to Australia and its people,
whose democratic beliefs I share,
whose rights and liberties I respect, and
whose laws I will uphold and obey.

Note: Australia still has work to do: same-sex marriage is still not legal in Australia though it is supported by a large majority of Australians.

9. What’s the difference between permanent residency and citizenship

Citizenship is the state of being a citizen, while having permanent residency means your status as a resident in Australia is now permanent. I hope that clears it up.

10. How does one get Australian citizenship?

There’s got to be a good joke in here somewhere, filled with Aussie stereotypes, similar to the Alaskan joke with the punchline, “Now where’s that Eskimo woman I’ve got to kill?”

11. Was it hard for you to get Aussie citizenship, because of, well, you know….?

Depends on what you are talking about. Potential answers include:
– No, they don’t check down there.
– That has been expunged from the public record but not from the drapes.
– I can hold my breath longer than you might imagine.
– I was young, impressionable, and didn’t know there was a cartoon artist in the room.
– Yes.

Getting permanent residency, my transplant history did cause some extra work. The only hurdle in citizenship that I faced was that I hadn’t spent enough time in the country. You must be in the country more than 75% of the last year and 75% of the last four years. In 2015, I was well over the limit of unexcused absences. The only loophole to skip this rule is if you’re a CEO of a publicly traded company. I checked with my boss if we could swap places. He said no. So I had to wait another year. 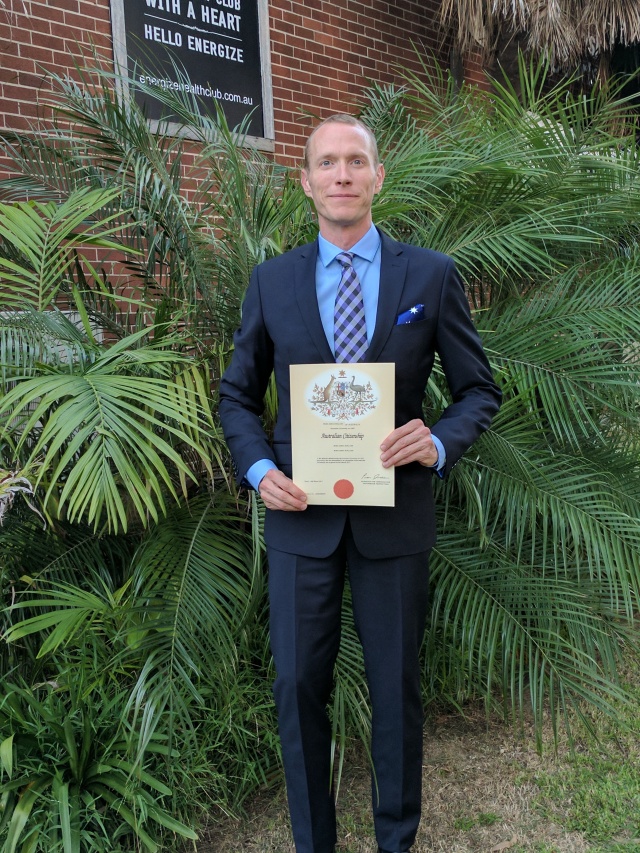